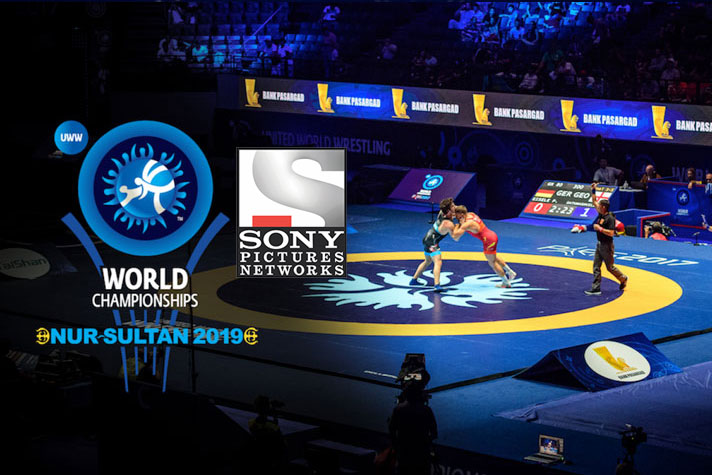 Sporty Solutionz, media rights partners of the United World Wrestling for the Indian sub-continent, has tied up with Sony Picture Network India for LIVE broadcast of the UWW Wrestling World Championship in the territory.

Sony Pictures Networks India has acquired media rights comprising of exclusive television broadcast rights and non-exclusive digital transmission rights for the World Wrestling Championship 2019, to be held from September 14 to 22 in Nur-Sultan, Kazakhstan. The agreement with Sporty Solutionz, UWW’s Media Rights exclusive partners for the territory, covers television and digital rights in the Indian sub-continent.

Organized by the United World Wrestling, the 2019 World Championships will be the first qualification event in select categories for the Olympic Games Tokyo 2020. The preliminary rounds will be livestreamed only on SonyLIV. The semi-finals and finals across all the three events – Men’s Freestyle, Greco Roman and Women’s Wrestling – and weight-categories will be telecast daily on SONY TEN 3 SD & HD and SONY ESPN SD & HD channels as well as live streamed on SonyLIV starting from September 14, 2019, until September 22, 2019. All the matches will be aired live in India between 4:00 PM and 8:00 PM IST allowing audiences to watch this prestigious tournament at prime time.

The UWW World Championships are the amateur wrestling world championships organized by the United World Wrestling. The event features competitions in Men’s Freestyle, Men’s Greco-Roman and Women’s Freestyle tournaments across different weight categories. From India, top wrestlers like Bajrang Punia, Sakshi Malik, Sushil Kumar, Vinesh Phogat and many more will aim to rise to the occasion.

“Wrestling has a strong fan base across India. Our partnership with Sony Pictures Networks India will usher a new era for the sport’s lovers, as they will for the first time get to watch a World Championship live simultaneously on television and digital medium. This initiative is another step in line with our commitment to take Indian wrestling to the next level.”